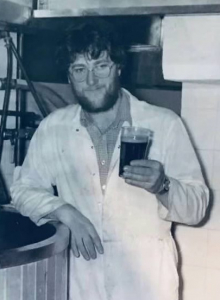 On Thursday, June 2, Timothy James O’Day, a loving husband and father of four strapping sons, passed away at the age of 62.  He went peacefully.  By his side were his wife of 40 years, Angela, and his eldest surviving son, Thomas.  He will be well-remembered for his quick wit and generosity.

Timothy was born on April 10, 1960, in Rochdale, England, to Terrence and Marjorie O’Day.  As a boy he enjoyed football, cricket and home brewing.  During his first year of college he met the love of his life, Angela.  Shortly after, the two began courting and were married on July 17, 1982  at St. Thomas Church.

In 1984, Timothy graduated from Heriot-Watt University, with a Bachelor’s Degree in Malting and Brewing Science.  He went on to work as a Brew Master for Bass Brewing, The Greyhound Pub, Kelmer’s Brewhouse, and Santa Rosa Brewing Company.  After working in the brewing industry, he worked for the City of Tiburon for 20 years.

Timothy was a life-long supporter of Manchester United Football Club, the England National Football Team and a card carrying member of the Barmy Army.  It’s coming home.  C’mon England!  He enjoyed spending time with his family, coaching his sons’ youth football teams, working with various organizations to benefit veterans, and a good beer.  He will be dearly missed.

Timothy is survived by his wife Angela, and his three youngest sons Thomas, Matthew and Rory.  He is preceded in death by his eldest son Patrick.  He also leaves behind five grandchildren Kylee, Patrick, Georgia, Drew and Brady.

Funeral services will be held on the Patio of Santa Rosa Memorial Park, on Saturday, June 11, at 11:00 am.  All are welcome.  In lieu of flowers, please make donations in his memory to Wine Country Marines.