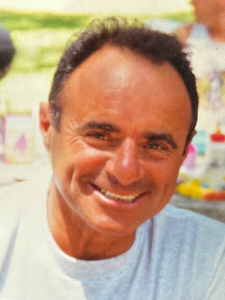 Salvatore Anthony Rizzo passed away peacefully in his sleep at his Santa Rosa home on January 4, 2023.

Sal is remembered by his larger-than-life personality. He was restless. He had a need to do things with new and old friends creating memories and stories that were shared for years to come. When not out with people, he could be found at home working on projects and tending to his very large garden which he would share with neighbors and friends.

Sal moved his family to Sebastopol, California in June 1976 where, although he continued to work for DiSalvo trucking, traded a life in the City for one in the Country. He was up for task and learned how to farm apples and raise chickens, rabbits, and sheep.

He loved food and never shied away from telling you his opinion of any restaurant. He also took many cooking classes at Santa Rosa Junior College and belonged to a mushroom hunting group for many years.

Sal was born with the disability of Club Feet. With special thanks for Shriners Hospital, he endured multiple operations and was in leg braces most of his early childhood. However, he was always a great athlete and playing high level baseball in San Francisco and handball at the South End Rowing Club. His disability experience taught him to be a fighter. He was tough and would back down from no one with a distain for bullies. There are many stories where he stood up to the bully defending the kid being bullied.

He loved sports, especially baseball and the San Francisco Giants remembering fondly the day the Giants moved from New York to San Francisco. Of course, he hated the Dodgers. Sal went to many Spring Training camps as well as several “fantasy camps” where he was always the oldest player in camp. He relished that.

When he liked what he was doing, Sal was a very hard worker. Working on the docks at Fisherman’s Wharf as a teenager, he settled in working as a Teamster driving a truck for DiSalvo Trucking delivering to businesses throughout the San Francisco Bay Area. After “retirement” at age 65, he applied for a job as a deck hand on the Bodega Bay party boat The Aggressor.  Although one of the most physically demanding jobs, Sal was doing what he loved; fishing on the ocean and being with people. Sal’s last fishing trip was out of Bodega Bay with his son Michael and granddaughter Mina less than two weeks prior to his passing.

In honor of Sal, you can donate on his behalf to:

Substantial food and drink will be provided so an RSVP is requested by email, text or phone to: