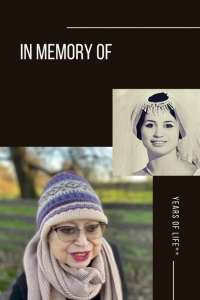 Linda Linnea Skoko was born on December 2, 1942 at Lincoln Hospital in Boyle Heights, California.  The same hospital as her husband, Frank Skoko who is 3 years her senior.  She was the daughter of Arthur C. Fuentes and Belen Fuentes.  Linda loved to dance and do dance contests and she was so good at it.  Growing up she lived in Montebello and attended Montebello High School and graduated in 1960. Not long after that, she married Frank Skoko who was her childhood sweetheart and best friend. Her Aunt Stella lived on the same street in Los Angeles, so they had known each other as young children because her aunt babysat Linda on many occasions.  She made clothing for her and they ate fudge together.  Linda had a lot of curiosity and some mischief but it was all in good fun.

They had their first child while they lived in Whittier, California.  She worked as a cosmetologist for a short time while raising their two daughters, Lennea and Dena Skoko.  Linda was a devoted wife and mom who chose to forego her career early on to raise her two daughters and maintain a lovely home.  She loved to volunteer to be the room mom and with the Girl Scouts as well as taking her daughters to dance classes.  Her daughters were always well dressed and she loved to do such beautiful hairdos to make them look like dolls.  It was her way of showing her love while being creative and revealing her artistic talents.

She and Frank read an article about the best place to live in California, so they came up to Petaluma to visit and found out there was a custom home being built in Cotati and they bought it on the spot.  Monterey and Big Sur were some of her favorite spots to visit, but they were expensive places to live.  Cotati is a quaint town and close to Bodega Bay, Santa Rosa and Napa Valley.  She loved the wine country and making trips to wineries and antique shops.  The beauty inspired her to develop her artistic side.  She joined the Sebastapol Center for the Arts to hone in on her skills and enter many art shows at all the local fairs including Petaluma, Santa Rosa and Sebastapol.

Linda had a strong voice.  She always wanted to be heard and she would often ask her daughters to post things online for her.  She had determination and a strong wit.  If Linda wanted it, she would get it, like getting a puppy at the age of 79.  Her love of animals meant many dogs and birds to fill her heart with joy in her time here on earth.  Linda was kind and generous to people and her good sense of humor allowed them to open up to her.  As a result, both her daughters are the same way.  Linda was a strong Catholic and very involved in the church.  Being a member of the Woman’s Guild was extremely important to the point where she donated some treats right before entering the hospital the week she passed away.  Her prayer regiment was daily and inspiring as Frank, her husband, would pray with her because to her it was a special time of devotion for both of them.  They were married for 60 years and his love for her is eternal.

Linda left to be with the Lord on Friday, July 15th, 2022.  Her legacy lives on with her beautiful grandchildren, Gavin, Hanna, Grant and Alana Hartoonian.  Each one has inherited different and amazing attributes and talents from their “Granny Num Nums.”

She lives on through her family as does her zest and love for life.  She is also survived by her husband, Frank Skoko, her daughters, Lennea Hartoonian and Dena Skoko, her son-in-law, Edik Hartoonian, her nephew, Edward Brenman, her neices Aleta Leasher and Kathlene Munoz, Aunt Stella Beltran, Cousin Peter Beltran, Cousin David Beltran, Cousin Tom Martinez, and Cousin Michael Martinez.