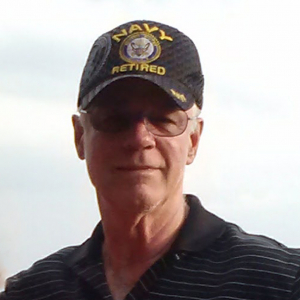 Jay Jones passed away on July 10, 2022. Jay was raised in Wilmerding, PA and joined the Navy in 1964. He was an Enlisted Air Crewman and was selected for the Naval Enlisted Scientific Education Program (NESEP) and graduated from the University of Louisville with a BSEE. Jay was awarded his wings as a Naval Flight Officer (NFO) and flew in the A-6 Intruder. While an instructor at Naval Station Norfolk, VA, Jay enrolled in Master of Science in Safety classes at the University of Southern California campus at Naval Station Norfolk.  Retiring from the Navy in 1984, he attended National Lewis University in Evanston, IL and graduated with a Master of Science Degree in Counseling.  Jay worked as a Certified Substance Abuse Counselor, Clinical Supervisor and Program Manager until retiring in 2002. Jay was the Commanding Officer of the Naval Sea Cadet Division 9-1-1 and the Navy League Ship Butch O’Hare at Great Lakes Naval Training Center. He was a Police and Fire Commissioner in Fox Lake, Il and a Reserve Community Service Officer with the Petaluma, CA Police Department.  Jay enjoyed coaching with the Rohnert Park Warriors, Rohnert Park Soccer Club, and Rohnert Park Cal Ripken. He traveled with his family throughout the country. He was a Certified SCUBA Rescue Diver. He was on the boards of SIRS and the Foxtail Seniors in Rohnert Park and loved golfing with them.  Jay enjoyed fostering kittens for the Rohnert Park Animal Services and his dog Cooper.

The family has greatly benefited from being involved with the character and leadership program Klemmer and Associates and Jay was very supportive.

The family asks that those who wish to make a donation in his honor that it be to the Mustard Seed Scholarship Fund for Klemmer Leadership and Character Development https://provisionbridge.org/mustard-seed-scholarship-fund/

Visitation and funeral services will be held at Eggen & Lance on Saturday, July 23, 2022 at 11:00 a.m. Following the burial with Military Honors at Santa Rosa Memorial Park at 1:00 p.m.