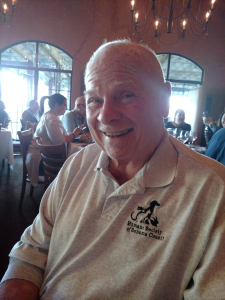 Curt Wheeling passed away September 16, 2022, at Kaiser Hospital, Santa Rosa, California, from complications of a stroke and brain cancer.

Curt was born July 21, 1947 to Walter and Theresa Wheeling in Great Falls, Montana. He was the middle child in a family of three siblings, older sister Karen and younger brother Terry. The family moved from Great Falls to Grand Forks, North Dakota, then in 1956 to Helena, Montana. Curt went to Helena schools, graduating from Helena Senior High School with the class of 1965. He attended Montana State University in Bozeman, graduating with a BS in Engineering.

After graduation, he worked as a bar tender for a while, then he and two friends bought a 50 foot sail boat, and spent 2+ years sailing the California coast and the South Pacific.

In 1973, Curt was hired as Communications Director for Governor Tom Judge, a position he held until 1981. He then went to work for AT&T in Helena, where he met his future wife, Lee Hargesheimer. They married in 1977, and he became dad to her two children. They moved to Aurora, Colorado, but parted ways in a few years. Curt later lived in Morristown, New Jersey, and then moved to the Bay Area in California where he continued to work for AT&T. He moved to Santa Rosa in 1999. He worked for, and bought and sold various telecom companies, including MCI, David Systems, Brooks, ATG, Phase Seven, and NTS Labs.

While in Sonoma County Curt was active in the community, including helping raise funds for the new Humane Society of Sonoma County facility on Hwy 12, and the Senior Center at the Finley Center in Santa Rosa. He was one of the first recipients of the Spirit of Sonoma Award.

2011 brought major health issues, and multiple hospitalizations and surgeries over the years. Curt never lost his wicked sense of humor, right up to the end.

Eggen and Lance Chapel in Santa Rosa are in charge of cremation. Interment will be private in the Hope Lutheran Church Memorial Arboretum in Bozeman, Montana.

If you would like to remember Curt in a special way, donations may be made in his memory to the Humane Society of Sonoma County, PO Box 1296, Santa Rosa, CA 95402-1296.