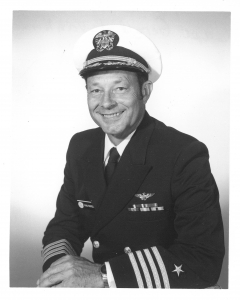 Capt. Gerald J. Van Norden, retired U.S. Naval Aviator, passed away on January 15, 2022, at his home in Santa Rosa after a valiant battle with Parkinson’s disease. His wife of 66 years, Maxine, and several family members were present with him. Gerald was born in Detroit, Michigan on March 15, 1932, and grew up in Dearborn, Michigan, graduating from Henry Ford Community College in Dearborn and Wayne State University in Detroit. He majored in Speech and Radio Production producing several radio programs which were popular in those days, such as: “The Green Hornet”. Jerry enjoyed singing with his college trio known as, “The Townsmen”, was active in the Drama Dept. and TKE fraternity at Wayne State University. Of course, television was just around the corner, but the military intervened, and he was on his way to a distinguished Naval career.
Gerald entered the Naval Reserve in 1951 while attending classes at Wayne State University. He began his Navy career as an enlisted Communications Technician. In November of 1954, after his graduation, he was accepted into the Navy’s first Aviation Officer Class (AOC) at Pensacola, Florida. In 1955 he was designated an Ensign and in 1956 earned his Navy Wings.
After attending Naval Justice School, he was assigned to Patrol Squadron One located at Whidbey Island Naval Air Station. He served there from 1956 to 1959 as Plane Commander and Legal Officer.
After a short stint as a civilian from 1959 to 1961, he returned to active duty and was ordered to NAS Corpus Christi as an in-flight and ground school aviation instructor. In 1964 he was transferred to VX-6, an Antarctic Squadron out of Quonset Point, Rhode Island. He flew C-117s and C-47s in support of the Navy’s Antarctic Base on Mcmurdo Sound.
In 1966, Gerald was selected for the TAR program and received orders to NAS Glenview as Flag Pilot to Chief of Naval Air Reserve Training. Four years later, in 1970, he was transferred to his first TAR billet at Naval Air Reserve Unit Alameda, where he worked in several different capacities including: Administrative Office, Manpower Officer, and Recruiting Officer.
In 1974, he was ordered to OPNAV in Washington as Reserve Coordinator for Logistics. In 1976 he was promoted to Captain and was ordered to Naval Reserve Readiness Command, Seattle. On October 10th, 1977, he became the Deputy for the newly created Naval Reserve Readiness Command, Region 22.
Gerald was ordered to the Bureau of Naval Personnel in Washington, D.C. and returned to California as CO of the Personnel Support Detachment at Treasure Island, retiring in 1983.
He received many awards, including the Navy Commendation medal, National Defense Service medal, Navy Unit Commendation, Antarctic Service Medal, Meritorious Service medal.
After retirement, they moved to Sonoma County where he played in many golf and tennis tournament, was an avid gardener, did beautiful woodworking and tapestries, created many bird houses for the church bazaar, supported the Santa Rosa Symphony and marveled at the accomplishments of his six grandchildren. He loved all the timeless old ballads and knew all the lyrics from memory. Jerry and Maxine enjoyed many evenings at the piano singing them.
Gerald was predeceased by his oldest son, Keith in 2003. He is survived by his wife, Maxine; daughter, Susan (Robert Friedman); son David (Paula); grandchildren, Gregory (Stacy), Jennifer, and Russell Friedman; and Vincent, Evelina, and Francesca Van Norden.
“Fair Winds and Following Seas”, Capt’n.
A memorial service will be held at Santa Rosa Memorial Park; 1900 Franklin Ave., in Santa Rosa on May 9th at 1:00 P.M. Pastor Janette Saavedra officiating, followed by military honors at the graveside on the Veteran’s Lawn. Donations in his name may be made to the Endowment Fund at First United Methodist Church; 1550 Montgomery Drive, Santa Rosa 95405.