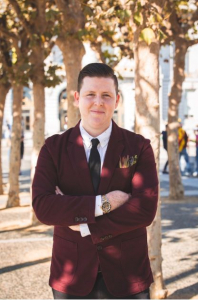 On August 26, 2022, our beloved, Michael Ryan Whalen had unexpectedly passed away at the young age of 29. Michael was born on May 12, 1993. Michael grew up in both Hollister and Santa Rosa California. As Michael began to grow into adulthood, he became very loved by so many Santa Rosa residents. Michael spent most of his career in the butcher industry and absolutely loved the art of butchering meat. He worked with many local businesses, and grocers and thrived in his meat cutting career. One of Michael’s amazing qualities was his wonderful sense of humor and he always knew how to make people laugh. He was kind, chivalrous, driven, adventurous, and was a true light in so many people’s lives. If he wasn’t working hard for his family, he was spending his time with his son, Makai. They enjoyed camping, spending time at the beach,  fishing and motorcycle riding together. He also loved spending time with his wife Kourtney, where they enjoyed going to concerts, exploring new states, cozying up on their couch with their 3 rescued cats and their dog, Bear. Their most favorite adventures of all were weekend visits to their happiest place on earth, Disneyland. Michael and his wife Kourtney were inseparable for 8 years and brought into this world a beautiful baby girl, Juniper Whalen. She was born on June 14, 2022. He truly was the most proud Papa to his children, and a proud husband to his wife. The family he had created was truly the light of his life. Michael is survived by his beautiful wife Kourtney Whalen, courageous son Makai Whalen and precious baby daughter, Juniper Whalen. His older brother Derrick Whalen. Twin sisters, Deana Whalen and Dawna Whalen and niece, Casey Alba. He is also survived by his Aunt, whom he looked up to as his mother Patricia Whalen and his cousin Nyane Gonzalez. Grandfather Don Pidd and Grandmother Deana Pidd.

Michael was known as an incredibly loving, cheerful, silly, selfless soul and was a true beacon of light in our lives. His bright smile, hugs and warmth will be truly missed but never forgotten.