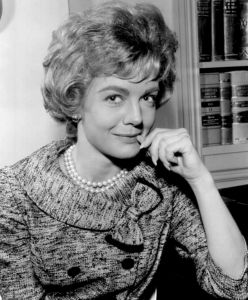 Joanna Barnes died after a lengthy illness on April 29, 2022 at her home at The Sea Ranch, California. Joanna was born in 1934 in Boston and grew up in Hingham, Massachusetts. She was a graduate of Milton Academy and Smith College, where she was elected to Phi Beta Kappa. She moved to California and soon drew the attention of audiences playing the ditsy debutante, Gloria Upson, in the 1958 film Auntie Mame. She was nominated for a Golden Globe award for that performance. Coincidentally, she had herself been a debutante at the Boston Cotillion in 1952.

In 1961 she played the role of gold-digger Vicky Robinson in the original movie The Parent Trap. In the 1998 remake, she had the role of Vicki Blake, the gold-digger’s mother. Her many film credits include Home Before Dark, Spartacus, and The War Wagon. Her extensive television credits include starring in three series, 21 Beacon Street, The Trials of O’Brien, and Dateline Hollywood. She was a frequent guest on dozens of TV series including The Millionaire, Mannix, Murder She Wrote, and Cheers. Joanna was a guest on many of TV’s early quiz programs and chat shows including What’s My Line, To Tell the Truth, and The Johnny Carson Show.

While pursuing her acting career Joanna was also an author. She was a book reviewer for the Los Angeles Times. Her four published novels are The Deceivers, Who is Carla Hart, Pastora, and Silverwood.  In non-fiction she wrote Starting from Scratch, a book that grew out of her syndicated newspaper column “Touching Home”.

Joanna married the noted architect Jack Lionel Warner in 1980. They lived in Montecito, California in a house Jack designed. In 2005 they left Santa Barbara County for the serenity of The Sea Ranch where Jack designed and built a house for them overlooking the Pacific Ocean. Jack died in 2012.

Joanna was admired and loved for her talents, her Intelligence, and her accomplishments. Of all her accolades and successes, however, one feather in her cap that always brought a full-throated laugh was that she was thrown out of the Boston Social Register when she became a professional actress.